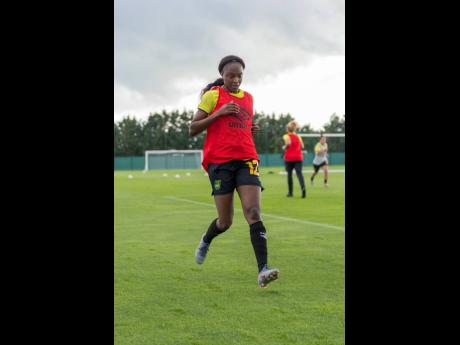 Reggae Girlz defender Sashana Campbell says that despite a difficult adjustment at the full-back position in her return to international duty, she is confident of being able to shoulder the responsibility going into the World Cup qualifiers.

Campbell returned to the island on Monday after playing in the two-game international series in Houston, Texas, which were the Reggae Girlz's first pair of games in 14 months since the COVID-19 pandemic halted the programme in March 2020.

Both games saw Campbell, who is a natural midfielder, returning to her converted full-back role that she occupied throughout the 2019 Women's World Cup campaign.

However, she admitted that it was a challenging adjustment after moving to the centre of defence this season with her Israeli club Hapoel Ironi Petah Tikva.

"I have been centre back my entire season in Israel, so coming back to the right-back position for just over two weeks (was difficult)," Campbell told STAR Sports. "There is room for improvement, so as time goes by and we get more practice games and more training sessions, then I know that for sure (I will improve)."

Both Campbell and Deneisha Blackwood have been converted to full backs from their natural midfield positions and at times seemed out of sorts, particularly in the US game.

However, Campbell anticipates that the position will be her long-term role with the national team.

"With our team, you cannot say you are going to stick to that one position, or focus on that one position. You have to be able to adapt to wherever they put you; but for now, I think that the right-back position is where I am expected to play more often," Campbell said.

Position flexibility has been something that head coach Hubert Busby Jr has stressed, insisting that players have to be versatile when the situation demands it in a national team setting.

National assistant coach Xavier Gilbert, who was with the team in Houston, said that while the full-back roles are positions that are being looked at with regard to being strengthened, he credited both Blackwood and Campbell for their performances over the two games.

"It's good to have attacking players in those positions, based on the modern game and how we want to play. Those are positions that we are looking for individuals to fill but at this point, for this tournament, those were the two best options available to us," Gilbert said. "Credit to them, I think they did well."