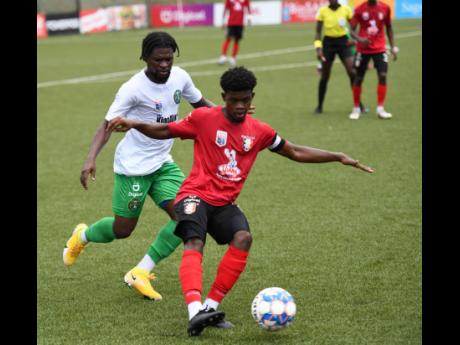 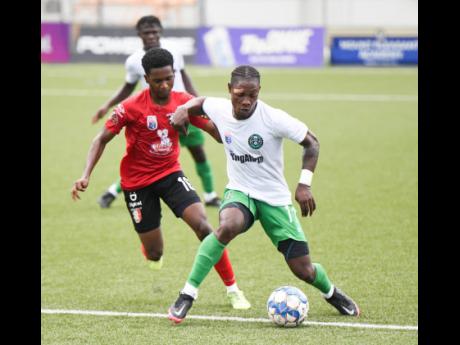 Donovan Duckie, head coach of Vere United FC, is surprised they are in pole position of the Jamaica Premier League (JPL), with a few rounds of games before the play-offs.

The unfancied Clarendon team, only promoted to the Premier League in recent years, took sole leadership of the competition following a 1-0 victory over Arnett Gardens Football Club (AGFC) in yesterday's feature game of a double-header at the UWI/JFF Captain Horace Burrell Centre of Excellence. Ricardo Dennis netted the game's lone goal at the 23rd minute - his second goal of the season - to give Vere all three points.

"Today (Monday) I am surprised we came away with three points. Even a 1-1 draw would have been a fair result based on the how the game was played," Duckie noted. "They created good chances and were unlucky not to score. I thought the game could have gone either way, but we defended creditably and put in a solid performance."

In the afternoon's first game, Waterhouse FC and Cavalier FC played to a 2-2 draw. Dwayne Atkinson netted twice for Cavalier, but on both occasions Damion Binns replied to ensure that the Marcel Gayle-coached Drewsland team walked away with a point.

"We were good for 80-90 minutes. We just did not put away our chances and that is what cost us the game," said Cavalier's sporting director Rudolph Speid. "We could have shut it down from we went up 2-1, but we decided that we don't play like that, so we kept on attacking as we thought we could have got the third and the fourth (goals)."

Waterhouse assistant coach, Damion Gordon, said "We are concerned how we are conceding goals and we have to fix that. It is a concern, but one of our objectives is the top six and we are making slow strides getting there."

Vere, meanwhile, put their foot down on the pedal to capitalise on a slip by Portmore United FC, the previous front-runners who went down 1-0 to Mount Pleasant Football Academy in earlier games this round, which was played at the weekend. Resulting from yesterday's win, Vere now lead with 14 points, one more than Portmore.

"We are doing exceptionally well. The table reflects that, but there is a lot to be done. We are not a deep squad, but we are making the best of what we have," Duckie explained. "To be on top of the league is a big surprise at this point. I know the quality that we have and the style we have employed. Other teams might have the luxury of 30 quality players. We don't have that, but our strategy and tactics create the platform for us to maximise our work together and achieve the same or better results than people who are more able in terms of talent."

Continuing, he insisted: "We are working to a plan and we are not changing that plan. It is easy to study what we do, but if we perfect what we do it is going to be difficult to play against us."

Arnett were the better team and had good opportunities, with Oshane Roberts, Kemoy Slowly and Demario Deacon failing to capitalise. The result kept them second from bottom with four points from six games and their coach Alex Thomas said with top striker Ronaldo Cephas missing, other players need to step up.

"Someone has to step up, especially with Cephas out. He is a young player, but he has been the one carrying the threat up front," said Thomas. "Other than that we are very thin (squad), but we keep working."