We were prepared - Speid 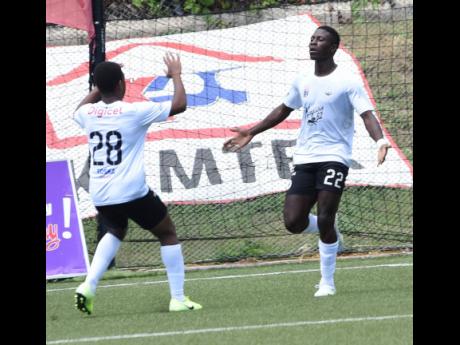 Cavalier Soccer Club’s Collin Anderson (right) and Giovanni Mitto celebrate after Anderson scored to give their team a 1-0 win over Tivoli in the first-leg semi-final of the Jamaica Premier League football competition on Saturday.

Cavalier drew the match 0-0 to secure a 1-0 aggregate win and booked their place in their first national final since 1981.

They will play Waterhouse in the final, who also advanced on the basis of their first-leg 1-0 win, as their return leg encounter also ended in a draw yesterday, 1-1 against St Ann team Mount Pleasant United. Waterhouse thus won 2-1 on aggregate.

Cavalier Sporting Director, Rudolph Speid, disclosed that his team had been preparing for any eventuality, including penalty kicks.

"We were preparing for it. For two months now we have been taking penalties every day and he (White) has done very well. We know it is one way to lose games, so we were just preparing for any eventuality," he said.

Ten minutes from the end, under pressure, a Cavalier defender handled the ball in the area. Veteran Jermaine 'Teddy' Johnson, who entered the field at the said moment and was the designated kicker, trusted the responsibility to Flemmings, whose effort was snuffed out by White.

"Now we are in the final we have to try and win it," said Speid. "We have been underestimated right throughout the season and Waterhouse will bring a good challenge to us. But we will be ready," he said.

Tivoli coach Phillip Williams said the instruction from the bench was for Johnson to take the spot kick.

"With his respect for the vice-captain and the fact he was (already) playing, 'Teddy' let him have it, but unfortunately for us it did not pay off," he said.

Waterhouse booked their place in a third successive national championship final, even though their first-leg lead was quickly erased,. Five minutes into the game, Jourdain Fletcher scored a wonderful free kick to level the tie.

However, Rafeik Thomas, with his first goal of the season, in the 45th minute, salvaged a draw for the Marcel Gayle-coached team.

"We knew Mount Pleasant were going to come and put us on the back foot, but we just wanted to withstand that initial pressure," said Gayle.

"But when they scored we didn't drop our head. We just picked up from there and stepped up our game as we knew the goal would come at some point."