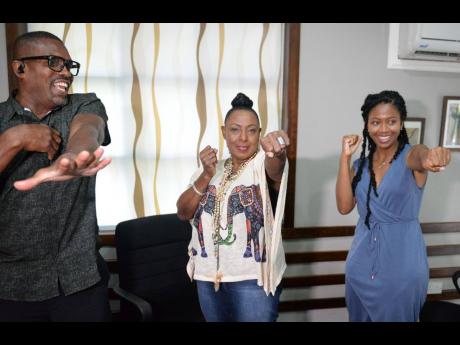 Sport Minister Olivia Grange (centre), practices her boxing form with the assistance of retired Jamaica-born Canadian professional boxer Donovan ‘Razor’ Ruddock (left), and his daughter, Kleopatra Ruddock. The occasion was a recent meeting between Ministry officials and members of Ruddock’s team at the Caymanas Golf Club in St Catherine recently.

The show aims to raise funds for the Good Hope Primary and Infant School in St Catherine.

Details of the 'Rumble in the Sun' event were discussed at a recent meeting involving Sport Minister Olivia Grange, and other ministry officials, at the Caymanas Golf Club in St Catherine.

The former International Boxing Council (IBC) heavyweight champion said the charity event, which is being organised by his team, is one way of contributing to the development of his homeland.

"I wanted to give back because my community is Red Ground district, and the Good Hope School," Ruddock said. "So what I would like to do is put on a show here with another legendary boxer and part of the proceeds will go towards infrastructure development to add more classrooms for the kids."

Grange welcomed the initiative, which she said will assist in revitalising Jamaican boxing.

"Your visit is timely because we are moving in that direction," she said. "We are doing the work and your involvement and support will strengthen our efforts."