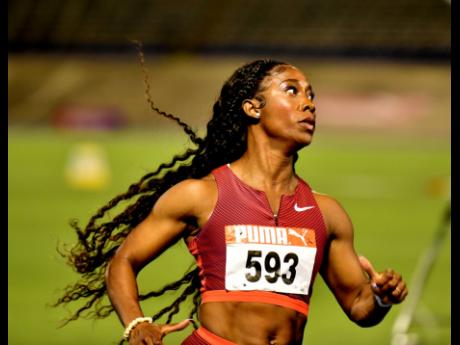 Shelly-Ann Fraser-Pryce moments after winning heat two of the women’s 100m preliminary round at the JAAA National Senior Championships at the National Stadium on Thursday, June 23.

Four-time World 100m champion Shelly-Ann Fraser Pryce says that she is benefiting from a lighter meet schedule in 2022, with her sole focus on the World Athletics Championships in Eugene, Oregon, later this month.

Fraser-Pryce completed her National Senior Championships campaign with a third-place finish in the women's 200m final, clocking 22.14 seconds, cementing her spot on the team in the event, with her already having a bye in the 100m as the defending champion. She competed in the 100m heats clocking 10.70, and while she reported to the semi-finals in her training gear, she did not finish the race.

With her being more selective of her events in 2022, Fraser-Pryce says that she is in good shape and is pleased that her performances have reflected her approach this season, given the demands on her body and her advanced years.

"I am feeling good," Fraser-Pryce told THE WEE K END STAR. "This year, I definitely ran a lot less than I usually would. And that is because I'm not young and I have to pick my races very carefully. I hope that it helps me to get to the end goal, which is to defend my 100m title."

Combined, Fraser Pryce competed in four sprint races in 2022, leading up to the National Championships, compared to last year when she had six outings. While she has had a two-week break in between races, her three races last weekend (100m heats, 200m semi-final and final) were the most she has competed in the space of three days. She did a world-leading time of 10.67 twice this season in the 100m.

However, she says that having the world lead brings her no comfort as she anticipates a fierce battle to retain her title.

"It's about putting yourself in a position to make sure that when it comes to the World Championships, you are prepared for the battle because it won't be easy whether or not you have world leads going in.

"It's about what you do at the Championships. I was excited that I was able to put together my races for the last couple of meets. So that is definitely what I have been aiming for."

While Fraser-Pryce did not indicate after the Championships whether or not she would do the sprint double in Eugene, she said that getting into the 200m event was the main goal, to keep that option open.

The World Championships begin on July 15.