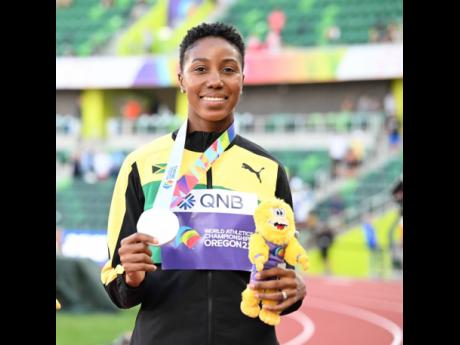 Shanieka Ricketts poses with her silver medal after the Women’s Triple Jump final at the World Athletics Championships in Eugene, Oregon, last night.

After missing out on the podium in the Tokyo Olympics last year, Shanieka Ricketts completed what she called a redemption season, capturing her second consecutive World Athletics Championships triple jump silver medal yesterday.

Ricketts finished with a season's best of 14.89m which was temporarily the world leading distance before retaining champion Yulimar Rojas' second attempt of 15.47 set the new mark. Tori Franklin of the United States (US) placed third at a season's best 14.72.

Ricketts said that the moment was special for her, considering how disappointed she was to finish fourth at the Olympics last year.

"In Tokyo, I was gutted," she said. "It's better to finish in eighth place than to finish fourth. To come back a year after and to redeem myself, it shows that I am a champion and it shows me that sometimes you have bad seasons, but it doesn't dictate who you are as an athlete."

Kimberly Williams finished seventh, at 14.29, and World Champs debutant Ackelia Smith finished 12th at 13.90. It was the first time that Jamaica had three competitors in a major global women's triple jump final, something that was not lost on Ricketts, who is excited for Smith's future.

"It shows that Jamaica's triple jump is in good hands," Ricketts said.

Fraser-Pryce qualified the fastest among the Jamaicans, clocking 22.26 seconds to finish second in her first-round heat behind Aminatou Seyni of Niger. She set a national record of 21.98.

Shericka Jackson, the fastest woman in the world this year, won her heat in 22.33. Thompson Herah clocked 22.41, finishing second in her heat behind Namibia's Beatrice Masilingi.

Yohan Blake and Rasheed Dwyer progressed to the men's semi-finals, which take place tonight at 8:50.

Blake clocked 20.35 to place fourth in his first-round heat, which was won by 100m World champion Fred Kerley of the US in 20.17. Blake advanced in a non-automatic qualification spot.

Dwyer clocked a season's best of 20.29 to place second in his first-round heat, which was won by defending champion Noah Lyles of the US in 19.98.

Akeem Bloomfield was fifth in heat three with a time of 20.56, which was not good enough to advance.

Samantha Hall failed to qualify for the final of the women's discus, with her best effort of 56.99m not enough to make the top 12.