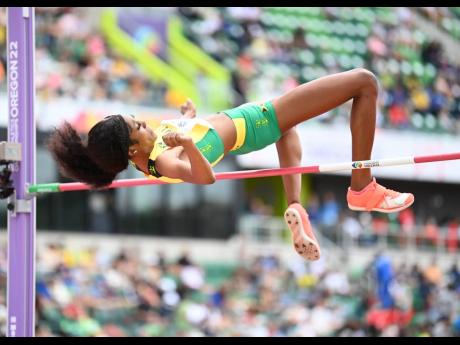 Jamaica’s Lamara Distin clears the bar at 1.90m on Saturday to advance to the Women’s High Jump final which takes place at 7:40 this evening, Jamaica time, at the World Athletics Championships in Eugene, Oregon.

For the first time ever, two Jamaicans, Lamara Distin and national champion Kimberly Williamson, will compete in a major global women's high jump final at the World Athletics Championships.

Having envisioned the possibility since the National Senior Championships (Trials), Williamson said she is pleased that Jamaica's progression in the jumps is bearing fruit. Both Distin and Williamson cleared the bar at 1.90m to make it into the top 12 in their qualification round on Saturday.

"This is history," Williamson told STAR Sports. "I am really happy that both Lamara and I got through, and that was the goal. I knew that all season, she has been consistent over 1.95. So I didn't have any doubt that she would make it. My goal was to just be there with her in the finals. This is a historic moment for us, for Jamaica, so I am excited."

Distin was equally pleased to have the presence of her national teammate with her on this journey and is focused on making sure that she meets the challenge that she now faces.

"It's great knowing that you have a teammate beside you. I just have to go out there and do what I have to do," Distin said.

Williamson was the only Jamaican competitor in the high jump in London 2017, but did not make the final.

Distin is making her World Championships debut, having set the national record of 1.97 during her college season at Texas A&M University in April, winning both the indoor and outdoor championships.

Distin says that her approach this season has improved since Trials, and she is hoping that she can deliver on her personal goal of 2.00m. She is only focused on executing the jump, not the enormity of the stage she will compete in tonight.

"I have been wanting to jump 2.00 for so long, so it would be a great feeling to do that," Distin said.

Williamson is not setting any expectations for the final, only focusing on improving her form to give herself a chance, despite difficulties in her form during the first round.

"It was good enough to get me through the finals," she said. "That was my goal to come out and make it to the final and take it from there."