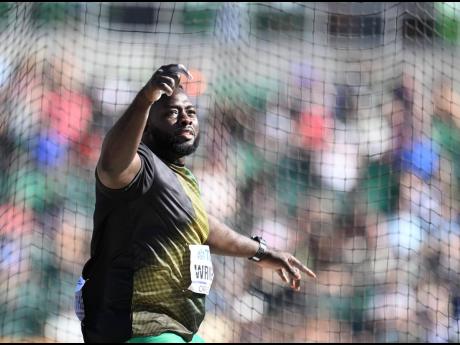 Chad Wright competing in the men’s discus qualifiers on Day 3 of the World Athletics Championships at the Hayward Field in Eugene, Oregon, on Sunday, July 17, 2022.

Forget not qualifying for the men's discus final. Chad Wright is just happy that he managed to get to the World Athletics Championships in the first place.

Wright arrived in Eugene 24 hours before Sunday's men's discus first round, having experienced complications in getting his United States visa last week. That complication Wright said was due to a mishap which was sorted out with his former college coach.

"It was just a misunderstanding with some misinterpretation of a phone call with my old coach from Nebraska University. But that was cleared up," Wright said.

Time was not wasted after securing the visa last week Thursday, which started a frantic preparation from when he started his belated journey to Oregon on Friday

"As soon as I got the visa I went to get the ticket booked and left the next day. I didn't get to Eugene until 1 a.m (Saturday) and it was pretty much a mad scramble to get myself ready (for the event)," Wright said.

Wright threw 60.31 metres finishing 12th in Group A, which included teammate Traves Smikle, who advanced to the final. While the circumstances in his preparation were not ideal, Wright said that he couldn't let a season's work evaporate.

"In light of everything that has happened, it was OK. It's not what I wanted but looking back at what happened I'll be OK with it at some point. I wanted to make sure that I got the opportunity to represent and I didn't want to waste a year of training," Wright said. "I'm still trying to just process everything. I was just trying to execute even though I didn't feel 100 per cent but I told myself if 'a dirt a dirt'."

Wright said that he will use the time in Oregon to train before he competes in the Commonwealth Games which starts next week.