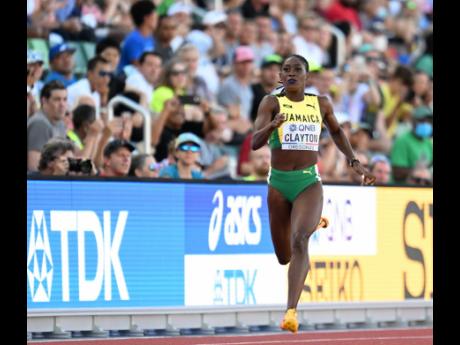 Jamaica’s Rushell Clayton on her way to a personal best of 53.63 seconds in the Women’s 400m Hurdles semi-final at the World Athletics Championships in Eugene, Oregon, yesterday.

Doha 2019 bronze medallist Rushell Clayton will have another chance to add to her tally, after securing her another Women's 400m Hurdles final appearance on day six of the World Athletics Championships in Eugene, Oregon, yesterday.

Clayton ran a personal best time of 53.63 seconds, finishing third in her semi-final, securing a non-automatic qualifying spot. It is the second time that Clayton has reached the 53-second mark this season. She said that it was satisfying after her injury forced her to end her 2021 season and credited her coach Reynaldo Walcott for her improvement this season.

"He is the one guiding everything I do, along with all of my prayers and my hard work," Clayton said. "I think I have gotten a lot faster because I still messed up part of the race. But I am looking forward to the final."

Clayton says that she can repeat her exploits three years ago when she clocked 53.74 to take bronze.

"There is almost a medal on my mind," she said. "That's the reason why I run just to win. If I fall short today, then I will go again tomorrow."

National champion Candice McLeod and Beijing 2015 bronze medallist Stephenie Ann McPherson booked their places in the Women's 400m final with contrasting results. McLeod placed second in her semi-final in a season's best of 50.05, while McPherson's third-place finish of 50.56 was good enough to advance as a non-automatic qualifier. World Champs debutant Charokee Young's campaign ended when she finished fifth in 51.41.

McPherson said despite feeling ill earlier in the day, she had to ensure her run was good enough to advance.

"I wasn't feeling well when I woke up and I ate breakfast," she said after the race. "It gave me a stomach ache. But this is my job. So I have to come out here and do the best I can and the result, that is what I could do today."

Christopher Taylor will be in his first World Champs final as he placed third in his semi-final heat in a season's best 44.97, advancing as a non-automatic qualifier. Nathon Allen answered the gun, but he did not finish his semi-final. He is being evaluated for an Achilles tendon injury which puts his availability for the 4x400m relays in doubt.

National record holder Navasky Anderson made his World Champs debut in the Men's 800m and finished seventh in his heat in 1:48.37 minutes.