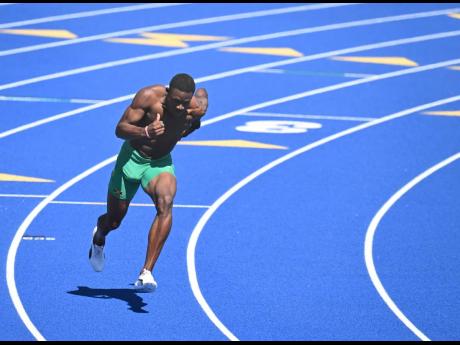 Gregory Prince goes through drills at Lane Community College in Eugene, Oregon on Tuesday in preparation for the Men’s 4x400m Relays at the World Athletics Championships on Saturday.

Now that he is here at the World Athletics Championships in Eugene, Oregon, Prince said that he wanted to learn as much as he can in the latter stages of the championships.

He arrived last Thursday, a day before the competition, after securing his US visa. However, he was unable to take part in the mixed 4x400m relay. He has already moved forward, training with the men's 4x400m relay team and already acting much older than his 19 years would suggest.

"It was pretty rough," he told STAR Sports. "But I am here enjoying everything around me. This is a great experience, with great teammates. Everybody is just together. I feel like I am 26 years old because we just gel and everything."

It was the uncertainty that was the difficult part of the process for Prince, who continued his preparations while waiting to learn whether he would get the approval in time, a delay that he attributed to miscommunication.

"It was a misunderstanding," he said, "Some things were overlooked. But at least everybody knew about [the situation]. I was just training and hoping that I would get it, so when I got the good news, [I was happy]."

Prince captured the Class One Boys 400m title for St Jago at the ISSA/Grace Kennedy Boys and Girls Athletics Championships in April, and placed eighth in the final of the National Senior Championships in June. He said that his laser focus attitude will benefit the team and give him valuable knowledge ahead of starting college at Texas Tech University this autumn.

"I feel that I can bring a lot," he said, "I am a very determined person. I don't give up that easily. When I am up there, there is just one aim and one focus. This is a great experience because most college students are here, so it will be a great experience knowing that I am out here and knowing how it feels [at this level]."