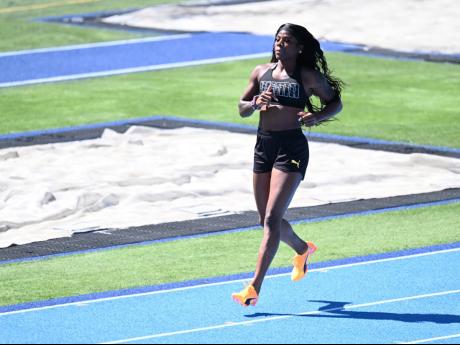 Britany Anderson, the 100m hurdles national champion, has a longer wait than usual for her campaign to begin.

But Anderson has been patient in her preparation for her first round which starts Saturday.

Anderson is coming off her first senior global championship final last year, finishing eighth at the Tokyo Olympics in 13.24 seconds. Despite the long wait to get going, she said that she has been focused on enjoying the small moments in between her preparation, to deal with the wait.

"Most importantly, I try not to think that I am coming out here to just compete, because that makes your mind go back and forth," Anderson said. "I am just here to have fun, all smiles everything," Anderson said.

Anderson's patience comes from how she has improved her technique this season which has led her to clocking a season's best time of 12.45 at the National Senior Championships last month. She said that calculating her races better has made the difference.

"Before last season, my biggest downfall was getting too close to the hurdles or always hitting the hurdle," she said. "Now it is just getting over the hurdle as cleanly as possible, keeping the race tight and fit."

Anderson said she also learned from her Diamond League showdown in June with Tokyo Olympic champion Jasmine Camacho-Quinn. She finished second, and says it also allowed her to be more composed.

"I felt like I wasn't patient with the last hurdle," she said. "So thank God that happened there, so I am really focused and I am really patient to know that I need to get this one right."

Anderson hopes that her Tokyo experience will better prepare her for her first World Athletics Championships campaign.

"It gave me a lot of confidence to go into this championship, and most importantly, be patient with myself in going over the hurdle and with the rounds," she said.