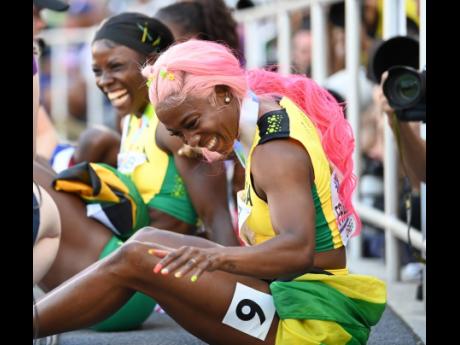 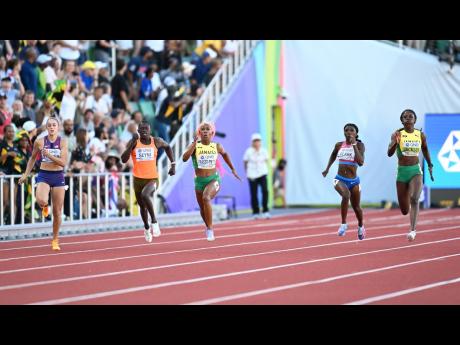 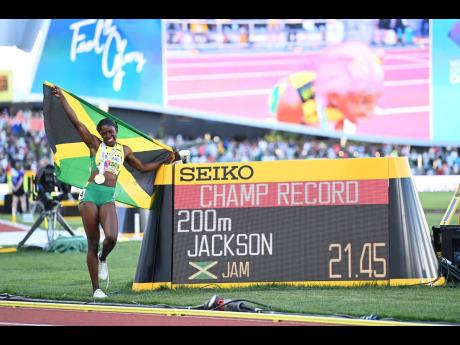 Jackson poses by the clock displaying her championship record of 21.45 seconds, the second fastest time in history.
1
2
3

The ghosts of Tokyo have been laid to rest. And with it, Shericka Jackson has the World individual title that she has longed for at the World Athletics Championships.

Jackson stormed to victory in the 200m women's final last night, with a championship record of 21.45 seconds, in only her second season at the distance. That clocking is also the second fastest in history behind late American sprinter Florence Griffith Joyner's 21.34, set at the Seoul Olympics in 1988.

Five-time 100m World champion Shelly-Ann Fraser-Pryce was second in a season's best time of 21.81, while former World champion Dina Asher-Smith of Great Britain was third in 22.03. There was no Jamaican sweep this time as double sprint Olympic champion Elaine Thompson Herah was seventh in 22.39.

Jackson said that her win has finally put last year's disappointment in the rear view mirror, where she eased up early in her first-round heat at last year's Olympics and did not advance to the semi-finals.

"I never wanted it to play on my mind," she said. "I just wanted to get past it. Now that I am a World champion and I bounced back from whatever I have been through, I can finally watch it."

Fraser-Pryce was happy for her teammate.

"Last year, when she didn't make it to the semi-finals, she cried and I knew how she felt," Fraser-Pryce said. "And you can understand the focus and determination to come back, to be able to bounce back after a disappointment is remarkable."

In other results from yesterday's seventh day, Adelle Tracey and Natoya Goule booked their spots in tonight's semi-finals of the 800m which is scheduled for 8:35 p.m. Jamaica time. Tracey finished third in her first-round heat in a personal best time of 1:59.20 minutes, and says that she is excited to show her strengths in her favourite discipline.

Goule won her first-round heat in 2:00.06 and she said that she felt comfortable in her run and says that she is in better shape this year, compared to last season.

"If you can come out of the first round feeling like you didn't run, then that is a good sign," Goule said.

National champion Chrisann Gordon-Powell narrowly missed out on a non-automatic qualifying place after clocking 2:01.91 in her first-round heat to finish fifth.

Jordan Scott did not advance to the final of the Men's Triple Jump as his best effort of 16.42m on his final attempt was not enough to make the top eight.