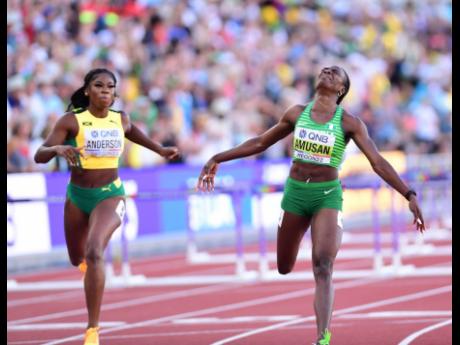 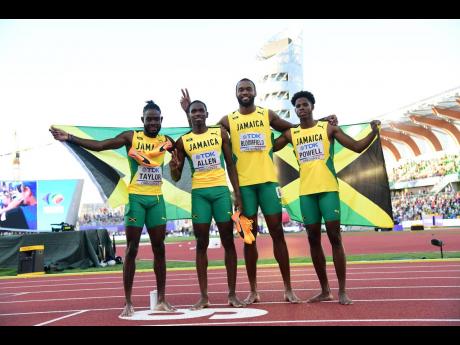 Anderson clocked 12.23 seconds for silver, but it was not a national record as the wind reading was +2.5 metres per second. She finished behind Nigerian Tobi Amusan, who clocked 12.06. She had set the world record earlier in the semi-final, clocking 12.12. Tokyo Olympic champion Jasmine Camacho-Quinn was third in 12.23. Former World champion Danielle Williams was seventh in 12.44 while Tokyo Olympic bronze medallist Megan Tapper's personal best (PB) of 12.52 in the semi-final was not enough to advance.

Anderson clocked 12.31 in her semi-final, breaking the record held by Williams and said she was surprised at how fast she ran.

"I wasn't planning on going that fast," Anderson said. "It was just to get to the final. But I was shocked that it was the national record and I am grateful for that."

While the time was a shock, Anderson said that she was not surprised with her performance.

"My confidence was high," she said. "I trusted myself, I trusted God. I worked so hard throughout the season and I knew I deserve it. So I came out here with really high confidence, knowing that I can do it."

Anderson's medal was the first of three captured by Jamaica on the final day, with the men finally getting on the podium. The 4x400m quartet of Akeem Bloomfield, Nathon Allen, Jevaughn Powell, and Christopher Taylor (in that order) clocked a season's best (SB) of 2:58.58 minutes to finish second in the final while the United States won the title in a world leading (WL) time of 2:56.17. Belgium was third in an SB of 2:58.72.

The women's 4x400m team then captured Jamaica's 10th and final medal as national champion Candice McLeod, Janieve Russell, Stephenie Ann McPherson, and Charokee Young (in that order) finished second in an SB of 3:20.74. The United States won in a WL 3:17.79 while Great Britain placed third in an SB of 3:22.64.

Jamaica finished with 10 medals at these championships, two gold, seven silver, and one bronze. They finished third in the medal standings with Ethiopia in second place also with 10 but with more gold medals (four). The United States topped the medal table with 32 (13 gold, nine silver, and 11 bronze). They also won the inaugural team championship title with Jamaica finishing in second place, based on points.