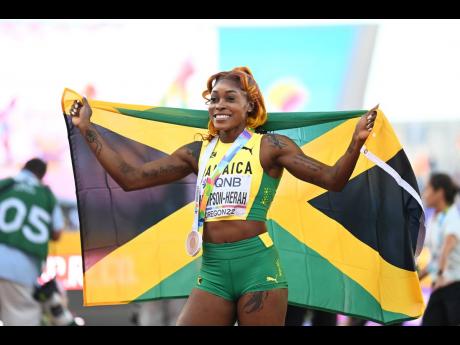 Elaine Thompson Herah celebrates bronze in the Women’s 100 final at the World Athletics Championships in Eugene, Oregon, on Sunday, July 17. 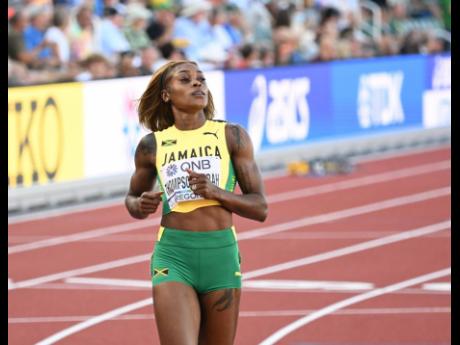 Elaine Thompson Herah after finishing Heat 2 of the Women’s 200m semi-final at the World Athletics Championships in Eugene, Oregon on Tuesday, July 19.
1
2

Thompson Herah, who has been battling injury this year, captured her first individual World championship 100m medal, a bronze, in a Jamaican sweep led by five-time World champion Shelly-Ann Fraser-Pryce. Thompson Herah finished seventh in the 200m final and was part of the Jamaica 4x100m team that got silver on Saturday.

For the first season under new coach Derron Herah, also her husband, she says that she is grateful for the medals and that it will take time to see the results from the new dynamic.

"It takes time," she said. "Expectations were high because I was coming off an awesome season where I ran 10.54 seconds (in the 100m) and 21.53 (in the 200m). Anything can happen. And you have seen a lot of athletes who won their Olympic titles last year and could not come out here and pass the first round because they had so many niggles and they tried to come out here and fix that. I think I am grateful to be one of those persons who had challenges and struggles, to come back out here and earn a medal."

That 2021 season saw her run the second fastest times in the history of the 100m and the 200m before 200m World champion Shericka Jackson's championship and national record run of 21.45 last Thursday.

Thompson Herah is satisfied with her pair in Eugene and also trusts her ability despite public criticism.

"For the past two [championships], I was disappointed because I went home without any medals and this time I have two," she said. "So why would I be disappointed? It is a motivation for me to say that I am strong. I think because I know what I am capable of doing, I don't need to be distracted by the noise or the sounds that people are making now. The same people that cheer for you are the same people who talk bad about you. So why would I be sad?"

Thompson Herah has not confirmed her participation in the Commonwealth Games which start this week.