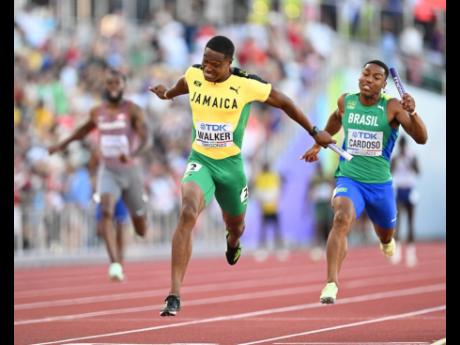 Another major championships has gone by without a medal for Jamaica in the men's 4x100m relay. However, sprinter Jelani Walker says that the signs are there for the young core of sprinters to end the drought sooner rather than later.

The Jamaica team of Ackeem Blake, former 100m world champion Yohan Blake, Oblique Seville, and Walker finished fourth in the final, in a season's best of 38.06 seconds, behind Canada, who won the gold in 37.48, the United States, who were second in 37.55, and Great Britain, third in 37.83.

While disappointed not to have snatched a place on the podium, Walker, debuting his first World Athletics Championships, says that they are not far off from getting into the medals consistently with the talent that they have.

"Our passes and exchanges were a bit tidier than they were in the heats. I can say that for sure," he said. "But I think that the first three teams kind of got away from us. [But] we are a young team, Oblique and Ackeem and myself. Yohan and Kemar Bailey-Cole are the two eldest in the team. They have a couple more years left in the sport and I expect us to grow and get better. We came fourth with a young team and we all had decent splits, we all did the best that we could at this level."

It is the fourth major championships without a medal for the men, dating back to London 2017, where the team did not finish the race as multiple-time World and Olympic champion Usain Bolt pulled up with an injury on the final leg.

Walker said that with those milestones, their return to the podium in the relays is not far off.

"We all lost a year because of COVID-19, and we had to transition again, and our bodies take time to get there," he said. "It takes time to get to that level. I can say that we are back on track. In the next couple of years, we will be in the medal standing, gold medal standing, for sure."