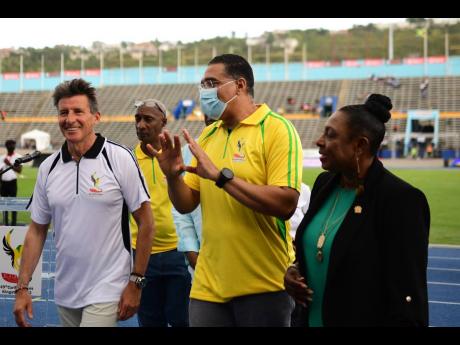 If Jamaica is to be in the running to host the World Athletics Championships in the future, World Athletics president Lord Sebastian Coe says that the renovation of the National Stadium has to be completed.

Coe was speaking at Sunday's press conference on the final day of the 2022 World Athletics Championships where Jamaica finished third with 10 medals - two gold, seven silver and one bronze.

The renovation project should have started last year but has encountered delays. In her sectoral debate presentation last month, Minister of Sports Olivia Grange said that the renovations are part of the Jamaica 60 legacy project and did not give a timeline as to the start of the project.

"She spoke to me about the programme that sits behind the refurbishing of the National Stadium and when and if that is achieved. That will be a world-class facility and I am sure that Jamaica is ambitious enough to want to stage our events," Coe said.

Jamaica hosted the World Junior Championships in 2002 which saw multiple World and Olympic champion Usain Bolt win the 200m title and was at the time the youngest World Junior champion at 15 years and 332 days.

While not giving a direct timeline as to when Jamaica or the Caribbean could be in line to host a World Championships, Coe said that the infrastructure will be the critical factor when deciding how long the region will have to wait to host other events.

"Even discussions about the World Relays have been (tabled). It's about facilities, it is about operation mobility and all those things and I hope that will be discussed in years to come," Coe said.

The 2022 World Championships was held for the first time in the United States in Eugene, Oregon, and the second time in North America. Canada hosted the 2001 edition in Edmonton.