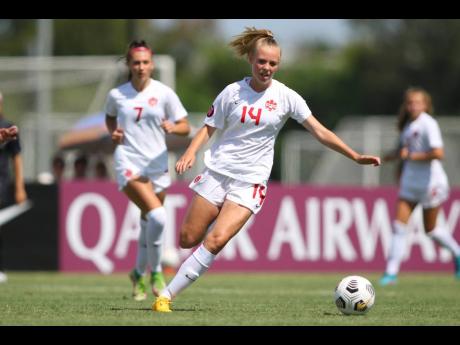 Keira Martin (right) of Canada in action against Puerto Rico at the Concacaf Under-15 Girls Championship in Tampa, Florida, yesterday.

Jamaica's Under-15 Reggae Girlz suffered a second straight big defeat in two matches at the Concacaf Under-15 Girls Championship in Tampa, Florida, yesterday, going down 11-0 to defending champions and hosts United States.

Abby Ballek scored four times for the North Americans, who led 6-0 at the interval.

Ballek got her team off the mark in the third minute of the Group B match with a low strike to the far post. Ayva Jordan headed in a free kick to make it 2-0 six minutes later. Then Ava Harrison added a third in the 12th minute after racing through and slotting past the goalkeeper.

It became 4-0 in the 23rd minute when Katharine Scott fired inside the near post from 18 yards and Ballek added her second and the United States' fifth with a close range strike in the 27th.

Ashlyn Puerta then scored in the 29th minute to give the United States 6-0 lead at half time. Daya King also had a great chance to get another before the break but hit the post with a penalty.

The young Reggae Girlz held out for the first 15 minutes of the second half but on 51 minutes Ballek got her hat-trick to make it 7-0.

In the 53rd minute Kennedy Fuller made it 8-0 then two quick strikes from Alexandra Pfeiffer in the 59th and 63rd minute made it 10-0. Ballek sealed the win in the 67th minute with her fourth goal of the game.

The Jamaicans, who lost their opening game 5-0 to Canada, will play Puerto Rico in a bottom of the table clash tomorrow. Puerto Rico lost 4-1 to Canada yesterday.

The United States and Canada, who both have two wins from two games, will play to decide the group winners. The top two teams will advance to the semi-finals.