Rains no bother yet – Wellington 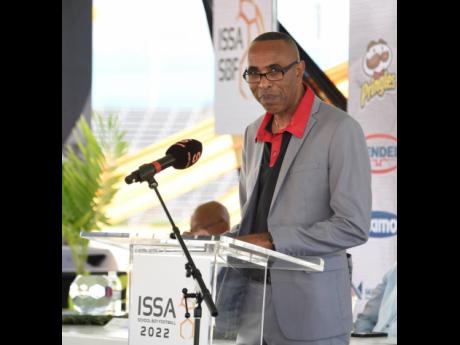 Keith Wellington speaking at the recent launch of the schoolboy football season at the National Stadium recently.

Inter-Secondary Schools Sports Association (ISSA) president Keith Wellington is confident that the backlog of schoolboy football matches because of the weather system affecting the island will not severely affect the competitions, with the governing body already having plans for these outstanding matches to be played.

ISSA had to postpone matches in both the Corporate Area's Manning Cup and the rural counterpart daCosta Cup from Saturday with the island experiencing heavy downpours, and, according to Wellington, the governing entity has been coming under pressure from some schools for their matches to go ahead.

"Based on the number of games in the competition, we have to try and play as many games as possible that can be played, although right now we can survive with the rescheduling that we have in place.

"We have built into the schedule gaps for rescheduled games, so right now we are okay if the rain holds up by Wednesday and we do not have another interruption between now and mid-October, going into the second round," he declared.

He also highlighted zones having breaks mid-week, which can be used for rescheduled matches as well as the one-week gap between the end of the first round and the start of the second round as possible period for these rescheduled matches.

"So we build that in, taking into consideration any issues which may have arose such as this. So our original schedule was built in such a way that it had gaps in it to facilitate rescheduled games. At the end of the day we are going to ensure that we only try and play games that are safe and where the facilities are able to accommodate the players and the officials," Wellington said.

Meanwhile, according to Wellington, ISSA will continue to monitor the weather system, although eight daCosta Cup matches will be played today with two others to be played tomorrow. All the games in the Manning Cup have been postponed.

According to Wellington, the decision to play the eight matches was taken based on information on the ground and the need to play all the possible matches.

"There are a few zones in the daCosta Cup that persons on the ground have indicated that there is no reason why their games should be rescheduled. They say they are able to play because there is not much rain and the conditions are suitable, as the playing fields have not been affected.

"Based on our information, the Corporate Area teams might be more affected than the rest of the country. When you look at the fields in Kingston most are void of grass, which makes it a bit more challenging when it rains, compare to other fields in the rural areas which have grass covering and a little better drainage," Wellington reasoned.