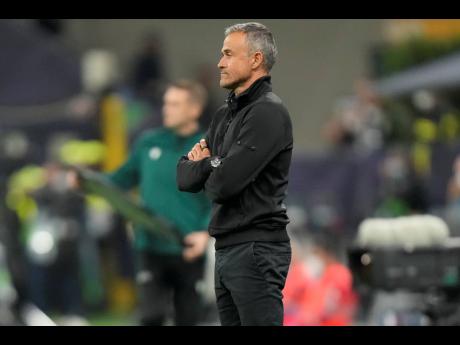 Coach Luis Enrique tried to stay optimistic about Spain's chances of advancing in the Nations League following a disappointing home loss to Switzerland.

After all, La Roja can still secure a spot in the finals with a win in Portugal today.

"We see it as a final," Luis Enrique said yesterday, two days after the 2-1 loss to Switzerland dropped Spain from first to second in Group A2 ahead of the decisive match in Braga. "It's positive to arrive in the last round with a possibility to win the group."

But beating Portugal isn't something Spain have been able to do recently. The Iberian neighbours have drawn their last four matches including friendlies and Spain have not won at Portugal in nearly two decades.

Spain's last victory against Portugal came in a penalty shootout in the semifinals of the 2012 European Championship and before that they won in the round of 16 of the 2010 World Cup in a match where Portugal complained of offside on David Villa's winning goal in the second half.

In Portugal, Spain are winless since a 3-0 victory in a friendly in 2003, when Fernando Torres made his national debut with Spain, and not long after Cristiano Ronaldo began playing for Portugal.

"It's all part of soccer. We have three recent matches in which we played well but didn't win and they ended in draws," Luis Enrique said.

The teams have drawn four straight since coach Fernando Santos took over Portugal after the 2014 World Cup, including a thrilling 3-3 game to open their campaigns in the group stage of the 2018 World Cup.

"We just have to focus on winning rather than reaching the final four," Santos said yesterday. "I want the players to face Spain on their merit, as they do all opponents. Do that and we will always be closer to getting where we want to go."

Spain need the victory after seeing their 22-game unbeaten run at home ended by Switzerland on Saturday. Portugal won 4-0 at the Czech Republic to take first place and earn a chance to advance with a draw today.

Spain are looking for their second consecutive appearance in the final four after finishing runner-up to France last year. At that time, Spain also needed a last-day victory to advance to the final four and they did it by shocking Germany 6-0 at home.

Luis Enrique said he didn't expect many changes in the squad for the match against Portugal despite the loss on Saturday, though he admitted they had to improve defending of set pieces, which is how Switzerland scored both of their goals.

Portugal, the winner of the inaugural edition of the Nations League in 2019, may see the return of forward Joao Felix, who was not available for the match against the Czech Republic because of an injury. He rejoined his teammates in training on Sunday.