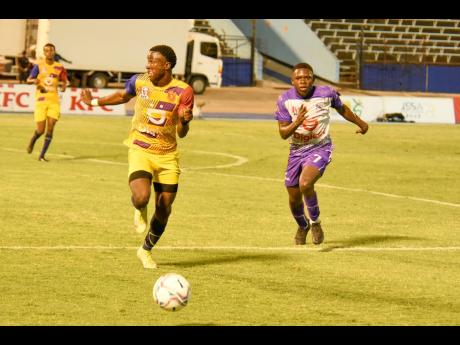 For the third time in five seasons, STATHS will play in the final after a 3-2 win in their semi-final encounter at the National Stadium last night, thanks to goals from Shakeone Satchwell in the ninth minute, Rashaun Frankinson in the 25th, and Dwayne Atkinson in the 65th. Nashordo Gibbs and Dujuan 'Whisper' Richards got on the scoresheet for KC.

The encounter was a rematch of last season's semi-final where KC prevailed 4-2 en route to the title. But this time it would be a reversal of fortune.

STATHS head coach Philip Williams said that while they could not stop Richards, they had to ensure that they achieved the perfect balance of attack and defence to get a win.

"KC are a high-scoring team and we knew that in order to beat them he had to outscore them and try to be strong defensively. Whisper is a difficult player to keep out as we saw. So we knew that on the offensive end we have to be very clinical and tonight we were," Williams said.

Even the sending off of Nickoy Gayle with almost 20 minutes to go didn't deter STATHS, displaying a grit that Williams praised. With the majority of the core being from the Under-16 that tasted title success in April, he is proud that they will have their moment in the group's first Manning Cup final.

"We haven't won any major title since I took over in 2017 but to go to three finals since then is an achievement where that is concerned. They are the Under-16 champions and they are hungry for more and, hopefully, they can go out and deliver themselves," Williams said.

KC head coach Raymond Watson said that the slow start doomed them despite their best efforts at keeping the game close.

"I thought we were slow coming out. They were on the front foot quicker than us and scored two very good goals that set us back. We came back into it and we just lost," Richards said. "We were always confident but STATHS did something wonderful to get this far. We were creating chances and I always felt that once we create we will score but unfortunately, we gave up a soft goal and we just never recovered."

STATHS' opponents will be Jamaica College who defeated Mona High 2-1 in the first game of the doubleheader, thanks to goals from Tarick Ximines in the 30th minute and Kevaughn Wilson in the 56th from the penalty spot. Donhue Mitchell gave Mona the lead in the sixth minute from the penalty spot. The encounter will be the third time in five seasons that JC and STATHS will meet for the title.