Yellowman heads out on tour despite no vaccine 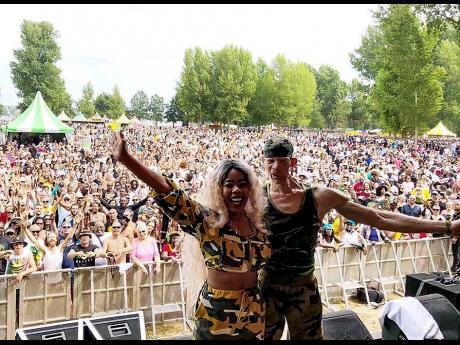 K’reema (left) and Yellowman at a show before the pandemic.

Seven months ago, dancehall veteran Yellowman was undecided about whether he would take the COVID-19 vaccine.

He said that he was being cautious but was aware that there was a possibility it would be required to travel, if not sooner, then later.

He said, "Countries already talking about taking the vaccine if yuh want to travel, so we will all have to eventually do what we feel is the best thing to do."

However, as Yellowman prepares to kick-start the US-leg of the 'No More War' tour next week, he has not taken a shot. The Nobody Move, Nobody Get Hurt artiste told THE WEEKEND STAR, "No, me not vaccinated."

He explained that it was not a requirement that he received the vaccine to travel to the US, where he is currently in rehearsals for the tour which begins on October 1 in Ithaca, New York, and ends on November 6 in Hollywood, Florida.

"Me nah go inna the vaccine talk; me just have to get the test [for the virus] when we travel to the different places," he said. "It just feels good to be on tour again, me more happy, people more happy, when we can tour."

He has collaborated with his daughter K'reema and son, Kemo, on several tracks. The tour is titled off of his latest album No More War, which was released in 2019, and he is looking forward to sharing the spotlight with backing musicians, Sagittarius Band and K'reema.

"The rehearsals going well. Me want go all of the places listed because the people haven't been able to see me since this scam start. We going perform Better Days and Father's Love of course, No More War and K'reema will do some solos. It's going to be good," Yellowman said.

The administration of COVID-19 vaccines across Jamaica has been prioritised as the Ministry of Health and Wellness moves to realise a 65 per cent vaccinations target for the population by March 2022. Vaccination is considered to be an important tool to help stop the pandemic and preliminary evidence suggests that vaccinated persons are less likely to die from COVID should they contract it. Nonetheless, the only thing Yellowman is adamant that he is a carrier of, is the message of peace.

"This is the time to get out the message out there, because we in a war. Look roun', people fighting fi dem lives," he said.