JCF to roll out Quick Response team in Corporate Area 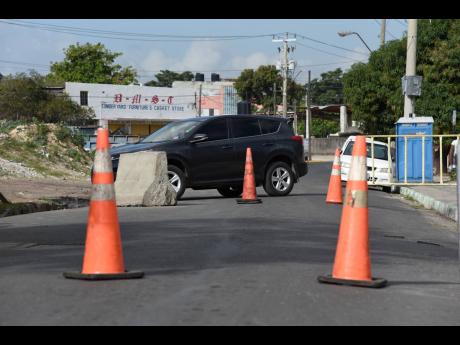 The entrance to Denham Town was blocked by the police on Monday, 24 hours after the shooting death of Harry ‘Harry Dog’ McLeod along Darling Street in the vicinity of Coronation Market in western Kingston.

Police Commissioner Major General Antony Anderson says that the Jamaica Constabulary Force (JCF) would roll out its Quick Response team across sections of Kingston and St Andrew in an attempt to stem the violence currently plaguing the Corporate Area.

The violence, particularly in West and Central Kingston, has claimed lives and injured many who have been caught up in the bloodletting with the recent attacks on homeless people the most chilling.

The police have said that this recent uptick in violence stems from gang-related reprisals and the assertion of dominance among rival gangs.

Anderson, responding to questions from journalists at a virtual press conference yesterday, said that an effective way to combat criminal activities within these communities is to increase the presence of police officers on the streets to counter the fluidity in which criminals operate.

"Once you have criminals operating fluidly from one space to another, moving and committing crimes from one place to another, it is important that we also are as agile and responsive," Anderson said. He told THE STAR that he believes deploying additional police in hotbeds on motorcycles would significantly help to reduce crime and violence before referencing the impact that the method has had on criminal activities in Montego Bay, St James.

"This is the method we have also done for Montego Bay, (and) it proved very effective in the responsiveness with some of those issues," said Anderson before recalling the swift response of the police team in light of a murder and shooting incident on Jimmy Cliff Boulevard last March.

Anderson stressed that the implementation of JCF's Quick Response team would not bear immediate positive results but expressed confidence in the strategies devised to ensure future success.

"We have the mechanisms in place. We have the intelligence and we are going to be more responsive. We will have flare-ups, but we will pivot quickly and we will be more agile in terms of our response to it," he said.