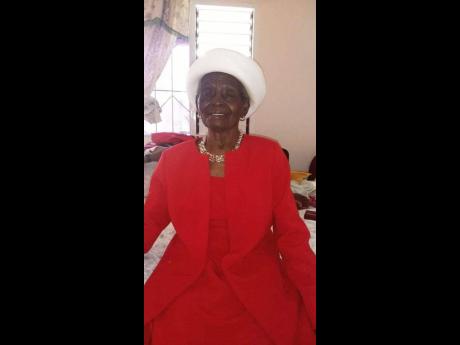 Though she was 102 and had health issues, relatives of Eda McKenzie are heartbroken after her death, as they feel staff at the St Ann's Bay Hospital could have given her better care.

McKenzie's granddaughter Samanthia Dickenson said that her grandmother had to sit in a wheelchair for more than 24 hours before being assigned a bed, only after the family persisted.

McKenzie was taken to the hospital on Tuesday, January 26, after concerns were raised over persistent swelling of her feet, which stems from her kidney issues. Dickenson said that her grandmother's caregiver, who took her to the hospital, called to express concerns over the lack of attention that the hospital staff had shown to McKenzie.

Dickenson said the caregiver informed her that a doctor only came to check on McKenzie once during the 24-hour window, and that was to do a COVID test, an X-ray to check for irregular breathing patterns, and a standard blood test.

Dickenson also claimed that the caregiver informed her that a doctor presented the test results on Wednesday morning, but left without giving an explanation.

All this time, relatives said McKenzie was still in the wheelchair. With no information coming, Dickenson's daughter, Jaala McFarlane, pushed the hospital staff to pay attention to her ailing great-grandmother. She told THE WEEKEND STAR that McKenzie was eventually assigned to a bed late Wednesday evening.

Not even proper sheeting

"Not even proper sheeting was on the bed. I had to beg a porter to ensure that she was covered properly," McFarlane said. After not hearing from the hospital, McFarlane said she went there on Saturday only to hear that McKenzie was in isolation, as a precaution she may have COVID-19.

"I wasn't getting any updates from them even though I was listed as the next of kin and this was between Thursday and Saturday when they told me that they were scheduling an appointment for me to speak with a doctor on Monday (February 1)," she added.

McFarlane said she returned to the hospital on Sunday around 1 p.m., and after four hours of waiting, a doctor informed her that McKenzie had passed away earlier that day after failing to respond to oxygen treatment.

The family said they have not received the results from the COVID test or a report on the cause of death. THE WEEKEND STAR reached out to the hospital for comment but received no response up to press time.