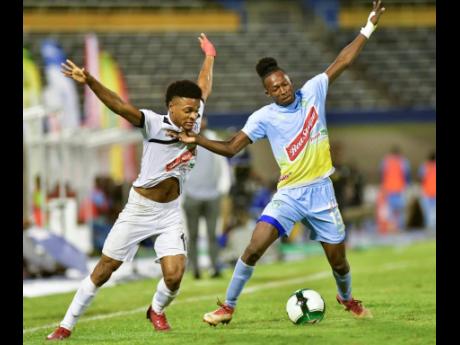 Daniel Bent, the assistant coach of Waterhouse, said the team is quite upbeat about their chances of lifting the Red Stripe Premier League (RSPL) title this season after their convincing semi-final display against Cavalier over two legs.

Waterhouse won their semi-final second leg at the National Stadium 1-0 on Monday, thanks to Keammar Daley's 46th-minute strike, for a 3-2 aggregate win and Bent says they are hungry for championship success.

"We did the job as the guys really wanted it. We are in the final again and it's a repeat (of last season's final)," he noted. "Last year, we were in the final and so this preseason we were very hungry for it (title). And although we had a lot of players out on injury, they came back and they played a big part.

"So we basically applied the knockout punch and it was all over. We are very confident whoever we play that we can win.. It doesn't matter who we play, this team has the experience, the technical ability and motivation to win. So it will be a grand event for us and the entire community is behind us," he said.

Bent thought they were able to keep Cavalier's attack under control and said they were never really troubled by their offence. Cavalier's best chance to get a goal back came close towards the interval when goalkeeper Diego Haughton dropped a cross and the ball fell to Alex Marshall but he kicked over an unguarded goal.

"We know they would change formation and they had two attacking midfielders instead of one, but that would have created some space in the backline and we can manage to use that and now we are in the final," he pointed.

"The first half was to see what Cavalier had to offer, they had the passion so we tried to slow it down. But we should have gotten two goals had it been for better execution, and then the third goal would have really knocked the wind out of them. But we got the goal we needed and we are happy for that," he continued.